I posted about this on here before but I thought I should do a more in depth guide for this process strictly from a LEGO user's point of view. First I must give credit to the guy's over on Retr0Bright's site. These are the people that pioneered this process and have perfected it for everyone else to use. Also thanks to The Brothers Brick for posting about it last year. I would have never found out about it if it wasn't for them. Now on to it.

If you are like me you have a bag of parts that have been exposed to the Sun for too long and are now yellow-y. This process will reverse the effect of UV light and change those yellowed bricks back to their original color. I will try and answer any questions about this process in this guide. The picture at the top shows a well-yellowed 1x4 brick and the same brick after 2 1/2 hours. 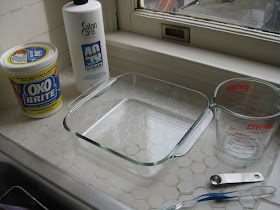 What do I need?
- Hydrogen Peroxide (H2O2) between 3% and 12% (10 - 40 volume)
- An "Oxy" detergent
- Sunlight or UV light
- Plastic gloves
- A container large enough to hold the solution and your bricks (preferably Glass or clear plastic)
- A measuring cup that goes up to 500 ml
- Yellowed bricks 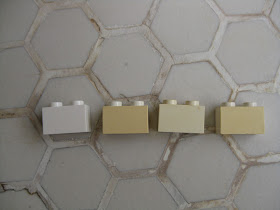 Yes, those are all supposed to be white.

That's it. There is another recipe for the solution that involves Xanthum Gum and blending it to make more of a paste but I found that a straight liquid works fine for LEGO. Make sure that the Peroxide is the clear/ liquid form and NOT the cream form. The cream has added chemicals such as Terpene which will harm the LEGO. Most "Oxy" detergents will work. The ingredient we are looking for is tetra acetyl ethylene diamine or TAED. Now some detergents don't list this as an ingredient but if it says Sodium Precarbonate and Sodium Carbonite you're good. 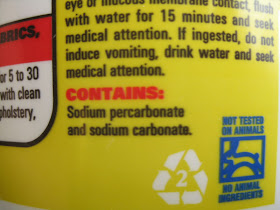 Sunlight or UV light is also needed. The UV blacklight should be UV-A with a range of 300 - 350nm. That is the ideal range to get the process going.

First put on your gloves. Best way to do this is measure and pour the H2O2 into the container. Then add the 1/4 tsp of Oxy to a small amount of warm water to help it dissolve then mix the Oxy and water into the H2O2. Adding a little water won't do anything to the process. It will dilute it just a little but not enough to effect anything. 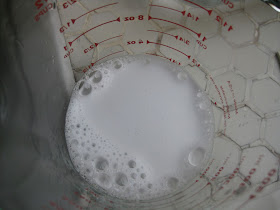 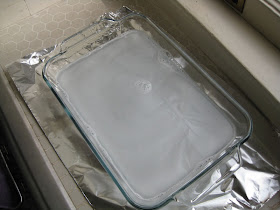 Once it is mixed together the reaction is starting and you need to add your LEGO parts. A trick to make it so the parts don't float is to dip them in slowly so all air bubbles get filled in. Or submerge them in water first then put them in the H2O2. 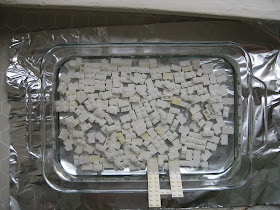 Now wait. Depending on severity of discoloration and strength of the H2O2 it can take anywhere from 2 hours to 24 hours to reverse the damage. Check every few hours to see if everything is ok. If you see tiny bubbles forming on the parts then you know it is working. 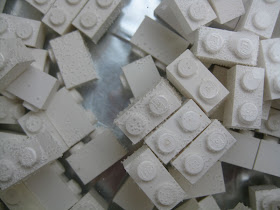 When you see parts that are done. Get them out and rinse them off. Set them aside with a fan to dry them quicker. Enjoy your new looking older bricks!

DO's and DON'Ts
DO - keep an eye on everything. Check every few hours to submerge any floaters and to pull out parts that look done.
DO - use this on printed parts. If the printing is in good shape there shouldn't be a problem but if the printing is old and worn you might see some fading.
DO - set your container on tin foil. This will help reflect the light back into the LEGO.

DON'T - put any metal parts in (wheel axles). The Oxy will eat at the metal and turn to rust
DON'T - leave in a hot place. Yes you want it in the sun, but if it gets too hot the plastic can warp
DON'T - use more then a 1/4 tsp of Oxy. Using more won't make it go faster. In fact it won't do anything but waste your detergent.

For more questions, look at the FAQ in the next post.
Darin at 6:24 PM